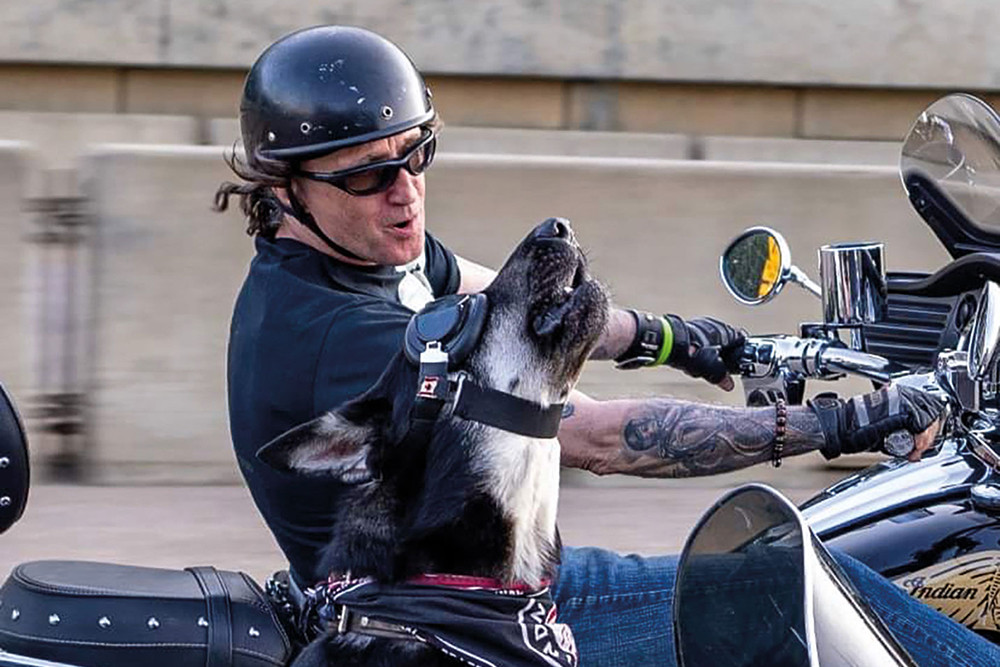 They are an unforgettable sight when you glimpse them zooming down the local streets or on the 63; a motorcycle, a man, and a large German Shepherd grinning at you from his trailer behind the roaring bike. They have become more than just FMF (“Fort Mac Famous”), too, as photos of the duo zipping around North America have graced dozens of social media channels; but their real claim to fame is the good work they have achieved.

Sandy MacDonald is a quiet, unassuming kind of guy. The Fort McMurray kind, the kind who works in the oil sands, has a quiet little house on a quiet little street, rides a motorbike, is short on words but long on kindness. And that kindness has led to an adventure that is not so quiet, and it revolves around that German Shepherd dog – well, two German Shepherd dogs, to be exact. 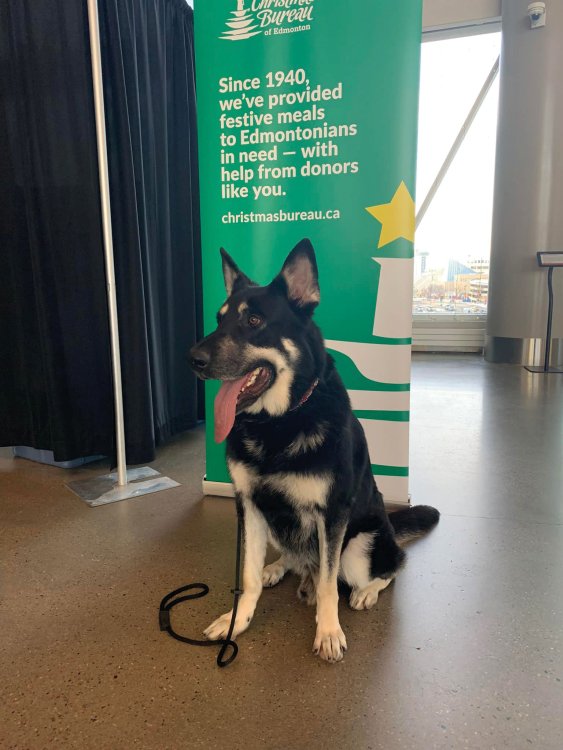 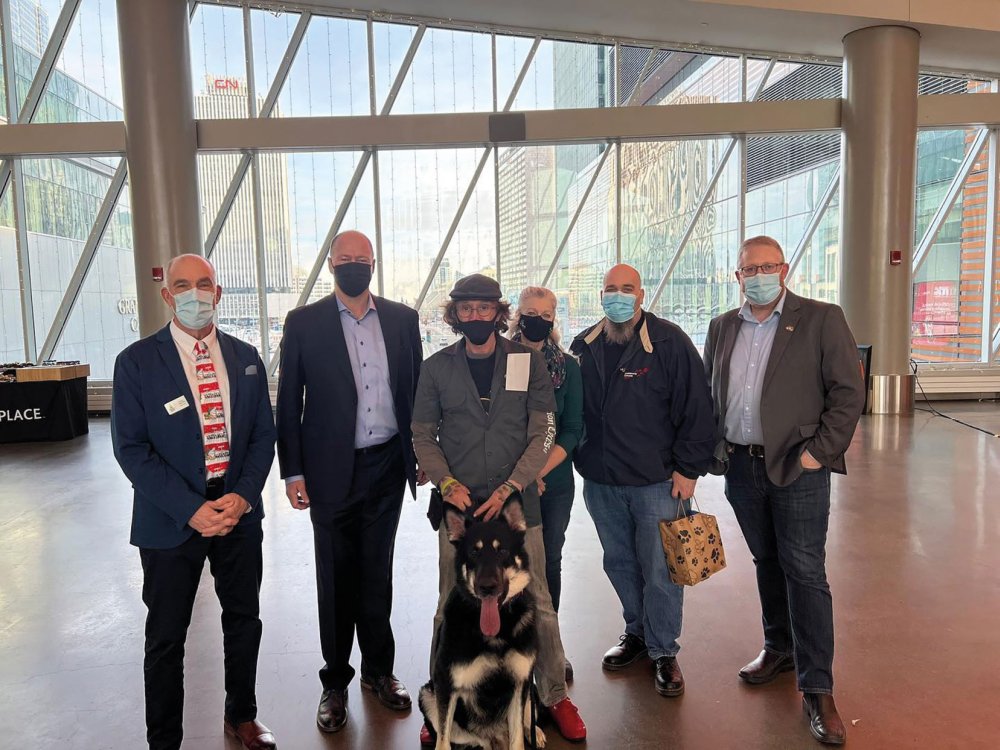 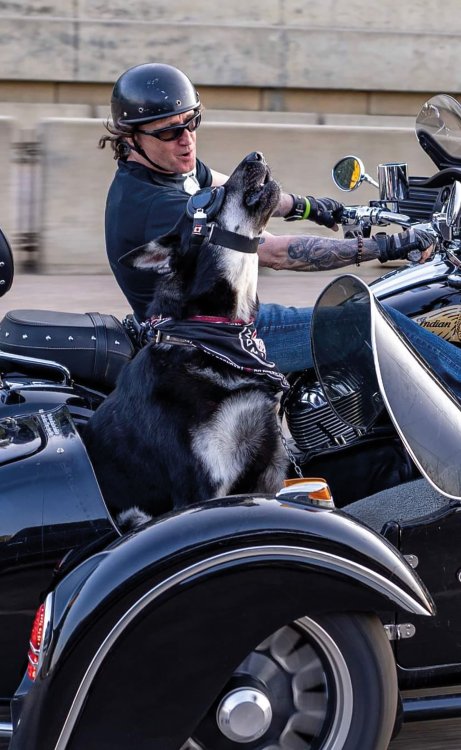 It started with Winky, a big galumph of a dog with bright eyes and a toothy smile that rivals that of most super models. When Sandy met Winky, a beautiful partnership was created; the kind of partnership where Sandy wanted Winky to share his motorcycle adventures, and so a trailer was added to the motorbike so Winky could ride.

And ride he did, all over the city and the region and the province – and longer trips too, down into the United States where they visited places like Arizona and where Winky (and Sandy) attracted not only attention but new friends and some pretty dedicated fans.

Sandy, being the kind of guy he is, thought about how he and Winky could turn this new-found notoriety into something more. Not something more for them, but more for others – and that’s how the fundraising began.

As Sandy and Winky racked up the miles, they began racking up donations, too. As the motorcycle wheels rolled, cash started rolling in to support causes like Cause for Paws, the fundraiser they created to support the Fort McMurray SPCA.

Over time, the wheels kept turning – both on the bike and in Sandy’s head – and new fundraising efforts were born, like donations to the Alberta Cancer Foundation, inspired by some special people in their life who have struggled with – and been lost – to this terrible disease.

And things were rolling smoothly, too, until one day in 2016 when tragedy struck. Winky, a seemingly healthy dog without a care in the world, suffered a medical emergency.

Sadly, there was no remedy, and Winky passed away, leaving a grieving Sandy behind.

And everyone who loved them took a deep breath. We all felt the loss so keenly, and wondered – in our hearts if not our heads – how Sandy could carry on without Winky at his side.

It is said with dogs that you cannot replace one that has been lost, but that somehow, some way, your heart makes room for one more. And so, after a period of grief and mourning for the beloved Winky, a new furry face appeared beside Sandy.

Greb – named after boxer Harry Greb – entered Sandy’s life as a little ball of floof with floppy ears, enormous paws and a goofy grin. He has grown now into a very handsome dog, one that maybe does not look a great deal like Winky, differing in colouring and size. And while Winky was a bit of a statesman, Greb is a bit of the class clown, stealing Sandy’s socks and giving some seriously strong side-eye when photographed. He has every bit of Winky’s charm, though….and boy, just like Winky who loved to ride, does Greb ever like to glide.

The adventures began again, motorcycle trips around the continent until COVID-19 reared its ugly head and shut down international travel. But despite the challenges, despite the heartache of losing Winky, despite the fire in Fort McMurray in 2016, despite everything, the donation wheels kept rolling…

And as of this writing, Sandy, Winky and Greb have raised over $150,000 for the Fort McMurray SPCA, and over $13,000 for the Alberta Cancer Foundation through Greb’s Ride for Patty, a fundraiser created in the memory of Patty Patterson and her battle with cancer.

Let that slosh around in your noggin for a bit. Sandy, that quiet, unassuming, Fort McMurray guy and two German Shepherds have raised an astonishing sum of money for some causes that are near and dear to almost all of us for the most obvious of reasons: both causes impact the lives of either people or pets. And they did it simply through sharing their love for motorcycling – and their love for each other.

They fundraise with passion and intensity and with their whole hearts, too, and along the way have gained even more friends and fans. They became the focus of a well-known meme featuring a motorbike pulling a dog in a trailer, and they have stolen hearts and minds with their kindness.

Even during a pandemic, they have managed to raise money for their causes, with recent recognition coming from the General Presidents’ Maintenance Committee for Canada Charity Committee, the International Union of Operating Engineers Local 955 and the Edmonton Christmas Bureau.  These groups invited Sandy – and Greb – to Edmonton to participate in a ceremony to award them with a cheque for $10,000 for the Fort McMurray SPCA, as well as a donation to the Edmonton Christmas Bureau in their name (and I am betting some serious head scritches for Greb). The photos from the event are about as you would imagine; a group of rather serious looking men and a rather goofy yet handsome German Shepherd completely stealing the show.

And there you have it: A tale of two wagging tails and one man who loves them both, and a story about friendship and love and kindness and generosity.

Winky might now have crossed the rainbow bridge, but his memory shines fiercely in the hearts of all who knew him; and Greb has proven that when it comes to dogs there is always room in those hearts for one more.

And Sandy? Sandy is still that quiet and unassuming Fort McMurray guy with a dog, a motorcycle, and one helluva story for when he rolls up to the pearly gates some day and is asked: “So, what did you do in your time down on earth, anyhow?”

“We did some riding and gliding,” he will reply, and the gates will undoubtedly open, admitting one quiet and unassuming man and two gum flapping, ear flying, furry companions off for another ride. 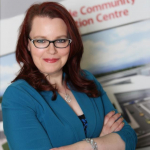 Theresa is a communications and stakeholder relations professional with a passion for the people of Fort McMurray Wood Buffalo, the written word, and, of course, cats and shoes. She is proud to share stories of life in the community she has called home for twenty years, and believes that every person has a story worth telling.