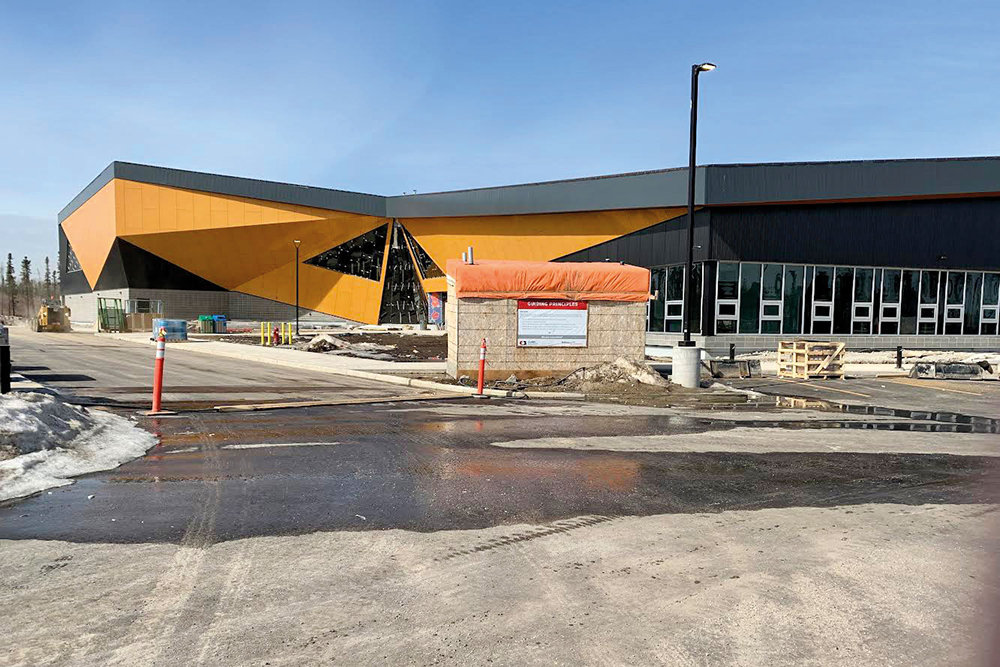 The community of Fort McKay is soon ready to begin a new chapter in pedagogy and cultural revitalization with the opening of a new facility, the Elsie Fabian School, this coming Fall of 2022. 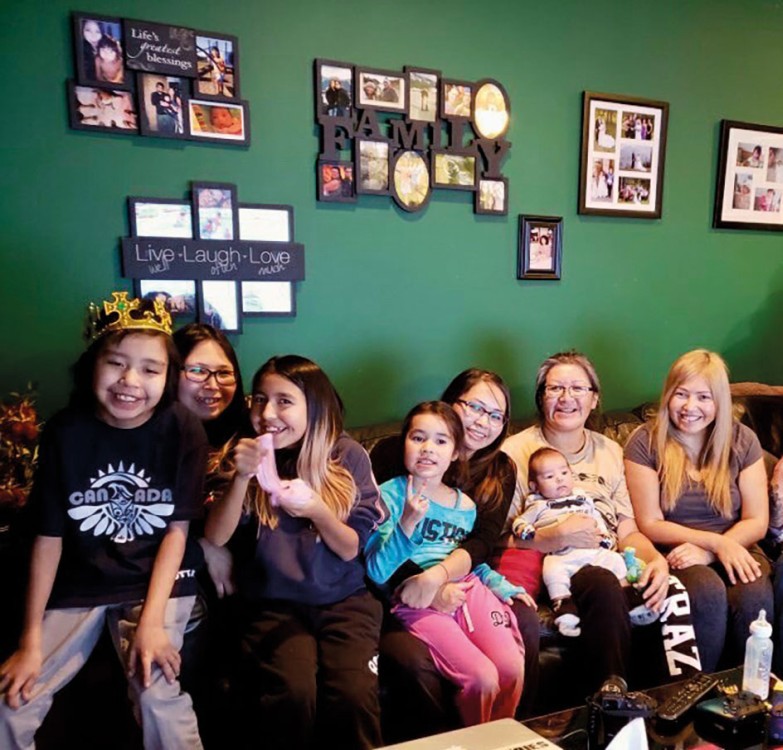 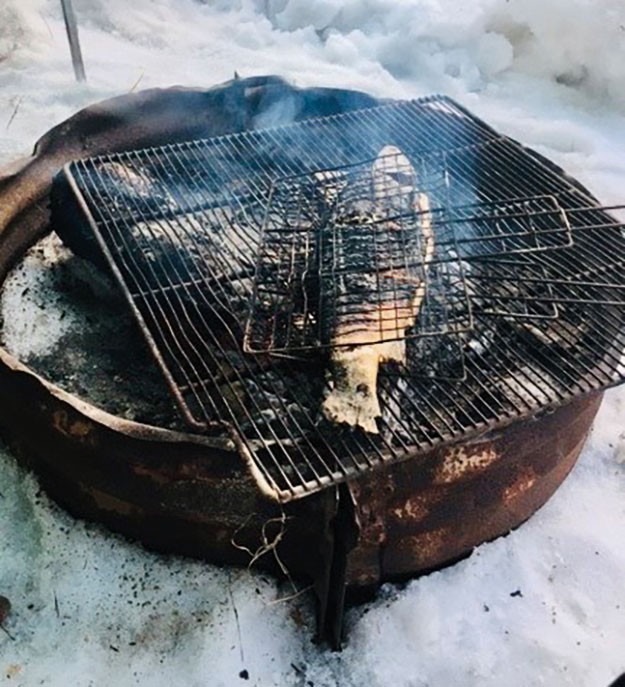 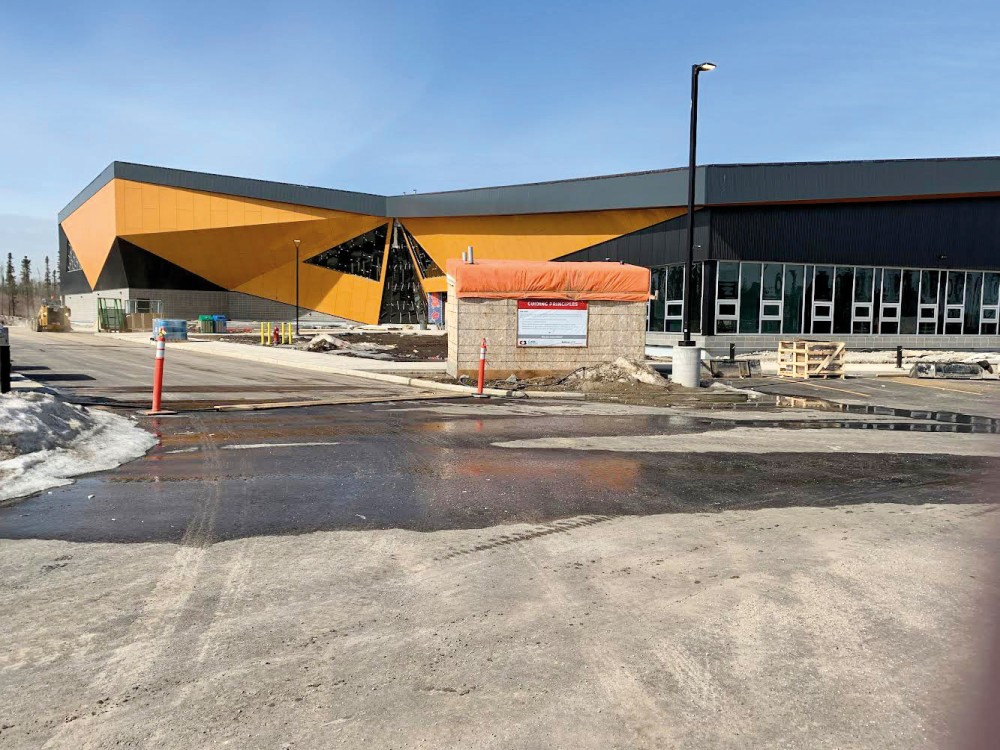 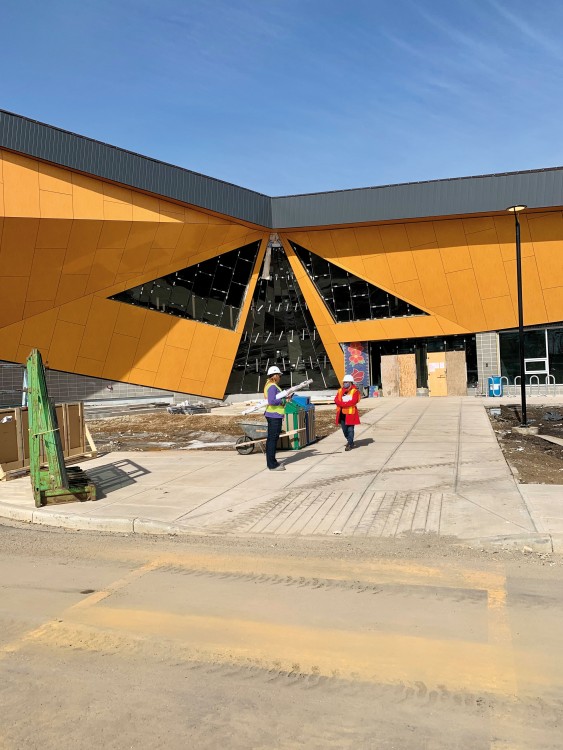 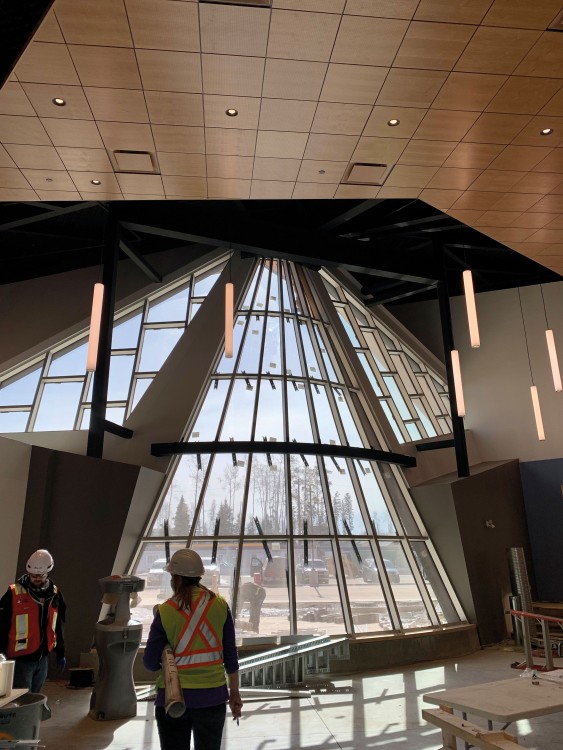 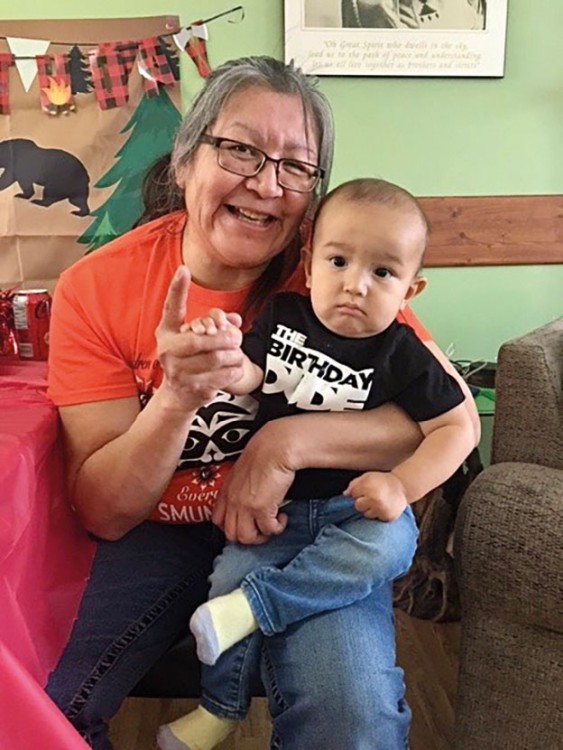 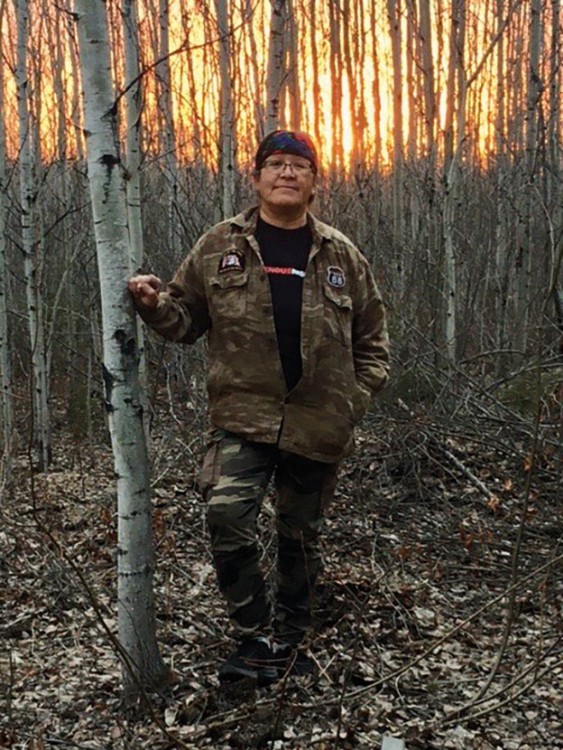 The foundation is built strong with an understanding of the need to nurture our connection to the land and preserve our Dene and Cree languages. A land-based learning curriculum, which aligns with the outcomes from the Alberta Education Program, will be introduced to the students with opportunities to learn traditional teachings from local Knowledge Keepers and Elders in the classroom/outdoor spaces. The facility will also include a full-size gymnasium with a second-story running track.

Many of the students in the community have been involved in a bussing program to attend elementary schools in Fort McMurray and this $30M school investment will prove to be beneficial for our youth to stay in the community and learn traditional ways of being. Today, it is extremely important to guide our young people in a direction that recognizes the complexities of the way knowledge is conceptualized but also empowers them to know it is possible to respectfully challenge colonial institutions.

During the inaugural academic year, there will be programming in place focusing on the Treaty relationship between the Crown and Indigenous peoples – historical events necessary to understand how colonization has impacted the way we identify ourselves as First Nation peoples. The extinction of our cultural ceremonies and languages has been a painful gradual process over the span of the assimilation period, with the pace rapidly speeding up as harmful policies were introduced in the 20th century; in which, the challenge to keep our traditions alive remains to be dangerously true for many Indigenous communities.

Treaty 8 Territory is the largest territorial agreement encompassing the Northwestern parts of so-called Canada, which meant early contact boasted plenty of travel for trapping and the fur trade. Thus, you will find many of our traditional Dene drums will be on a smaller scale to adapt to a long day of travelling to create alliances. After searching for more information about the history of our region, it was important for me to recognize that we were originally a Dene community before the introduction of our Cree relatives, subsequently followed by settler contact. It is the little facts about the history of how we came to be that help me understand my connection to being a person of Treaty 8 Territory.

The Fort McKay Education Department is working hard to decolonize Eurocentric views within the educational context through land-based learning at this new state-of-the-art facility. For example, there will be an emphasis to follow the cycles of the moons and how the passing of the seasons marks certain activities for the water, plants, and animals. Students can expect to learn new skills like gathering wood, making dry fish, building shelters, beading, etc.

Myself, I was born a member of Chipewyan Prairie First Nation (where I attended Father R. Perin school on reserve) and eventually transferred my membership to Fort McKay First Nation. My parents wanted to further support my learning endeavours, and it was decided I would leave Janvier to live in Fort McKay and attend Sister Mary Phillips School in Fort McMurray via the earlier mentioned bussing program. I graduated from high school in 2012 and pursued many years of post secondary.

I struggled with my identity in my youth, not knowing which community I should identify with and ultimately learned the hard way how the government tends to keep us in a box, despite being multi-faceted individuals. Looking back, I wish I figured out sooner that we will always have a western education curriculum, but we will not always have educators who hold ancestral wisdom and traditional teachings. It was a pleasure to connect with fellow Education Committee member, Jean L’Hommecourt, to discuss our connection to the land and the women’s role in an Indigenous framework. Like my own story, Jean identifies as a Dene woman and has a lived experience growing up in more than one community in the Wood Buffalo Region.

Jean is an avid YMM Magazine reader, and I am pleased to have the opportunity to honour her as a local Knowledge Keeper for Indigenous History Month. She is the daughter of Norbert and Annie L’Hommecourt and feels strongly about her main role as a matriarch to her kin. As a survivor of Indian Residential School, it took her some years to not feel like an outsider in the community and to address the traumas of being separated from her family and homelands.

Jean described her official return to Fort McKay in 1996: “For a while, we lived transiently, and it was a consideration to find a sense of belonging in Fort Chipewyan, but I wanted to be closest to Poplar Point where my original roots began so I decided as an adult that Fort McKay would be my home going forward.”

Jean’s paternal family comes from Athabasca Chipewyan First Nation, but she spent about 10 years in the Northwest Territories where she was able to find a safe space to connect back with her Dene culture and attain an Office Administration Certificate from Aurora College. Jean started working for the Nation as a Receptionist for several years before accepting a role in membership administration. As time progressed, she worked in other departments and served previous Chief and Council as an Executive Assistant.

It is evident that Jean gained much knowledge about the Nation and felt it was time to be involved in her community in a way that was meaningful to her values. Jean recalled a time when she took her mother to the bush to have tea by a fire and internalized the pain that was shown on her face due to the destruction of the trees and soil around them. It was when Jean decided she wouldl focus on protecting the territorial lands.

Jean further reflects, “This is why I keep myself close to the land, because I feel that my ancestors are there and they’re watching over me. I must do right by them because of what they instilled in me. I want to make them proud and pass on the knowledge that I have on to the future generation. I want my grandchildren to be proud and be strong in their identity.”

She felt a need to connect with more Elders and advocate for the Boreal Forest, so she found herself being more involved with consultations with the oil and gas industry and eventually took on a job position within the Industry Relations department. Jean mentions some words of advice regarding being invited to the decision-making table. “I attended every dinner gathering there was in the whole of Turtle Island, I mean, they had gatherings in Manitoba, Saskatchewan and Alberta, British Columbia! I have attended every one of those, you know.  I participated because my Dene culture is something that kept me alive. It is something to fall back on when I feel discouraged or weak, so I do my thing out there and reconnect with the land when I need to and seek my ancestors. It’s how I find a balance.”

Another initiative Jean has had the pleasure to partake in is a five-year study from Canadian Alliance for Healthy Heart Healthy Mind, in partnership with the Population Health Research Institute.

Currently, Jean is involved in the Land Code Committee and Education Committee for Fort McKay First Nation. She recalls a recent new experience: “I had the opportunity to have some input in the Human Resources process for the hiring of the principal, it was amazing to have community members involved in the interviews. I think it shows just how much we believe in the well-being of our children.”

Jean’s grandchildren will be students at the new school in the upcoming year. It is important to her that there is a safe learning environment that addresses learning barriers in a holistic manner and recognizes we deserve a good life not embedded in systemic racism. In addition, she hopes students will embrace the lessons that come from respecting the environment. “The land controls you and determines whether you’re going to stay out there depending on how the weather goes, and, and other elements of that sort. So that’s where the humility comes into place because you’re not in control.”

These wisdoms are one of the same as the legacy left by the late Elsie Fabian, also a matriarch, who served as a member of the Northland School Division No. 61 Board of Trustees for over 25 years and paved the path for educational leadership. In addition, Elsie served as the Chairperson for the Board Committee of the original Fort McKay School (constructed in 1977).

Jean reflected on her own learning journey and the teachers she had who helped her navigate survival in the bush, citing the importance of water to our livelihood:

“Water is a big element as well, as far as land-based teachings, because a lot of our teachings involve water. I think about my grandchildren and how they just need to turn on the tap and there’s your water. There are so many teachings, traditional wise, as to how we used to gather our water. We used to dig holes in the ground and prepare for the mosquitoes! We would seek out creeks and small rivers for fresh water. Colonialism has taken over that aspect and removed the respect for the water.”

Indeed, it is an absolute privilege to have access to water that did not require boiling before consumption. The value of reciprocity within our relationships and our responsibility to the preservation of natural resources should be at the forefront of reconciliation priorities. I firmly believe moving forward in a good way means working in collaboration and integrating Indigenous perspectives into mainstream currents, while being mindful of the level of emotional labour taken on by Indigenous educators. It will require critical reflection and a deep respect for the traditional territory you reside on, understanding the agreements put in place to foster peace and friendship. I do not identify as a Canadian; this is my personal choice after recognizing my ancestors walked, fished, hunted, trapped, harvested on these lands prior to July 1, 1867.  To support reconciliation in Canada means to protect Knowledge Keepers like Jean L’Hommecourt, to honour the memory of past Indigenous leaders like Elsie Fabian, and to celebrate the expression of my identity today.